Pandy lies on the ‘Offa’s Dyke’ – an ancient border between England and Wales which was contructed to keep the warring English and Welsh tribes apart.  ‘Offa’ was once King of Mercia (757-796 A.D), and Mercia is an ancient area once comprising most of central England.  In marrying off his daughters, Offa united England and became its first overall king.  He then had extensive influence, including continental contacts with Charlemagne and the Pope.  However, the Vikings soon began arriving on the English shores and upset Offa’s hopes of greater European Union.  That would have to wait another 1300 years – at least! 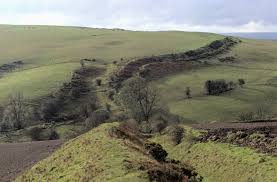 Today, Offa’s Dyke is a long distance footpath running between Chepstow in the south to Prestatyn in the north.  That is to say,  from sea-to-sea along the Welsh/English border.  On route, it wends its way through fields and woods, over stiles, up hill, and along ridges.  It is a rambler’s delight.  I walked the eighteen miles from Pandy to Hay-on-Wye one grey, drizzly day, several years ago, sweating  buckets as I  climbed uphill, then getting drenched in a continuous downpour for the last five miles of the ridge.  That was after spending a day (and night!) getting to the start point by an assortment of public transport and camping in a field behind a pub.

My tent stood alone in the pub field, whilst surrounded by sheep who seemed rather bemused by its presence.  That is, until they caught me looking at them.  Then they guiltily averted their eyes to concentrate on the tufts of grass they were muching instead.  I’d placed the tent in a shady corner of the field where beech trees overhung a small brook. Quite lovely, I thought.  I’d even placed the tent opening towards the brook; facing away from the field, pub and road behind me.  And looking across the gently trickling waters, I picked out a track slowly curling up a steep slope ahead and followed it’s twisting path as it rose and rose; onwards and upwards.

I turned and faced the other way, looking past the pub at the field’s end.  It wasn’t an especially attractive pub, but it was functional and I’d call in later.  Beyond the pub, across the road, were more sheep, munching more grass, in more fields. It was all so delightfully and quintessetially Welsh.  Just the sound of my brook trickling and the sheep studiously munching.  It was that quiet.  Sloping vales of green, green grass – in fields framed by dry stone walls.  And more sheep.  Sheep in big flouncy fleeces growing dirty-grey.  Young sheep, observant, with ears alert and protruding.  Little lambs sticking close to mums, heading-butting stomachs as they take a drink.  Sheep baa-ing and bleating, and always looking worried.   You can see that in the whites of their eyes watching you while they munch. Heads down, eyes up.  Munch, munch, munch…

Further to the right, however, stood a striking vision of doom.

‘Good heavens.  I would look worried munching all day beneath that’, I thought.

A dark, foreboding form blocked out the sun.  It also blocked out the sky and cast a dark shadow over the munching sheep.  It was a huge, monstrous black mass, itself kept in shadow by one dark, menacing cloud hovering over it’s summit.  Its name, I shortly discovered, was Skirrid Hill.   And it was deeply cleft- as if an incensed god had axed it in two.  I shivered and felt a cold chill, despite standing in the sun.

But the hill also had an attraction:  The attraction of danger and peril, death and doom.  So, like a docile, hypnotised zombie being pulled towards it (or like Frodo approching Mordor!) I left my tent and walked across my field, past the pub, along the road and up a side-lane;  slowly being drawn beneath its shadow.

At the top of the side-lane stood another pub.  But this pub was evidently much older than the one at the bottom of the lane being a  traditional, country pub built with large, chunky stone blocks.  Outside hung the pub sign:  The Skirrid Inn.  The sign imitated the black hill beyond and into its cleft was struck a bold bolt of lightning.

‘I’ve found Mordor!’ I decided.  ‘Surely, Tolkein must have visited ?

Entering inside, the pub was cool and dim.  It was also empty:  An empty large hall-sized room operating as a bar.  Bulky oak dominated – on ceiling joists, cumbersome tables, weighty chairs, warped floorboards; a staircase spiralling upstairs with a forearm-sized banister, and solid sidedoors with oak patterned grain, lines and knots. Cast-iron too was evident – as great iron handles and locks on the side-doors, as the black curling railing on the spiralling staircase, as fireplace tools standing beside a great hearth that was sure to give a roaring blaze on colder days.

A barmaid appeared, silently, as a ghost in a haunted house, and I ordered a beer (a traditional ‘real ale’).  Asking about the pub, the barmaid instantly handed me a brochure which mysteriously appeared in her hands.  I took it over to a table, with my beer, and sat down on a roughly-hewn bench whose back rose up against the wall.  Then I read the brochure which explained that the pub was the oldest pub in Wales (first recorded in 1110 A.D.); that it was one of the most haunted places in the U.K., and that it had been used during the ‘bloody assizes’ conducted by the infamous ‘Hanging Judge Jeffries’.

Following the death of Oliver Cromwell (1656), Charles II was ‘restored’ to the throne.  The political classes then split.  On one side were the protestant ‘Whigs’, who distrusted Catholicism and preferred parliamentary power to the monarchy.  On the other were the ‘Tories’, who favoured the Anglican church, were hostile to Protestant dissenters, and preferred monarchical power to the parliament.

Charles II died and was succeeded by Catholic James II, whose catholic inclination certainly rocked the boat! Rebellions arose, particularly in S.W England.  The largest of these was staged by the Duke of Monmouth, an illegitimate brother to Charles II.   So, James II sends Judge Jeffries to deal with the problem, which meant arresting the rebels for treason.  The resulting trials becoming known as the ‘Bloody Assizes’ in which hundred were arrested, tried and executed.  The Duke of Monmouth was executed in 1685 (decapitation).

In fact, James II played a bad hand.  As Judge Jeffries carried out his trials and executions, order was brutally restored.  Hence Catholicism’s foothold in England strengthened. But this alienated the Whigs beyond breaking point.  In consequence, they requested that James II’s daughter (Mary) and her Dutch husband (Protestant William of Orange) come to England and jointly take the throne.    The people of England supported the whigs, including the military, and the request was granted.   James II was dethroned and William crowned king.

The beer was great, the history – chilling, and the barmaid turned out to be both friendly and informative.  Not a 17th century phantom at all.  In fact, I took a second beer with her before heading back down the lane to my tent.

Next morning, with the dew still wet on the grass and the sun still low, I packed up my tent, hoisted my rucksack, traversed the brook, and set off up the hill towards Hay-on-Wye.   ‘Skirrid Hill’ now stood behind me, slowly shrinking in size as my feet plodded forward.  The initial climb was steep and soon I was sweating profusely whilst panting like a dog.  Legs and lungs ached as I pushed ever upwards, higher and higher, counting steps to mark progress.   In reality, the ascent is only a few hundred metres.  But with a 35 kg rucksack on my back, I felt every single one.  Each metre was gained with a straining of sinew, a stretching of tendons, a torturing of muscle, and a cursing of joints.  I was learning the hard way that I was out of shape!

The summit was achieved before mid-morning.  I slumped down on a grassy verge and took a well-earned rest.  Finally my heart stopped pounding and calmness in my breathing resumed.  I could then appreciate exactly where I was.  Larks warbled above and from a pathside spinny – thrushes chirped.  But besides them – I was virtually alone.  Virtually, for I espied some military men gathered amidst the gorse a hundred metres away.  Soon they also espied me and slipped silently away like disturbed deer.  I guessed they were SAS men on training from nearby Hereford. Continuing on, the route now eased.  The following twelve miles would be along the high (Hatterall) ridge, flat and easy going.  And that was how it was as the miles slipped by.  But what a view !  For mile after mile patchwork plains below stretched out towards hazy horizons; towards Gloucestershire on one side and the shapely Welsh ‘Black Mountains’ on the other.  And yes, they looked ‘black’. Again I was reminded of Tolkein and the black, ominous mountain of Mordor in the distance to which Frodo had headed. 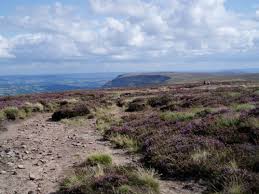 Finally the Ridge ended, abruptly, and dropped for several hundred feet.  This is ‘Hay Bluff’, a site enjoyed by hand-glider enthusiasts who come here to take advantage of the rising thermals.  I watched them float for a while, slipping off my rucksack and sitting on a spikey clump of heather.   Then it was time to move on.  So,  finding a path down, I stepped over the edge and began my descent. And this time it was my calves that complained bitterly.  I could feel then stiffening up and knew they’d be hell tomorrow.  But I still had a few miles to go to find a camp site in Hay-on-Wye and I hadn’t even reached the bottom yet.  March on, tired legs.  March on…

On reaching the bottom it started to rain.  As a light spray, at first, then growing in force with huge water droplets falling straight down and splatting into puddles.  I knew the final few miles would be less pleasant.

I arrived in Hay-on-Wye:  A small, market town known for its second-hand bookshops.  There are many – small,  large, specialist, and general, indoors and outdoors, with thousands of old, rare, popular, contemporary, obscure, fiction, non-fiction, hardbacked and  paperbacked tomes on display for any discerning bookworm.  Outside, signs like pub signs hang above the shop doorways.  These occasionally mislead thirsty drinkers who stumble in looking for a bar and find instead a silent hush of book-lovers standing between aisles with noses between book covers. 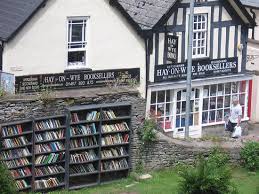 I first made the same mistake and then found a pub which served hot meals.  I entered, leaving my soggy walking smock and dripping rucksack near the entrance.   I then received the most welcome mug of tea;  trout, peas and chips; open-fire warmth, and pint of fruity ale that I’d ever had; along with the information that there was a campsite just a mile out of town.

The following morning it looked as if rain was settling in for a while.  So, packing away the tent again, this time soaking wet, I decided to make a run for home and returned first by bus to Hereford, then by train to Oxford.

(None of the photos are mine – only the words.  All from google images, helping me revisit this corner of England).