To be perfectly honest, fishing is not really my cup of tea.  If I want to spend time peacefully sitting beside a river, lake or canal – then I  will – with a book and a tin of beer.  That’s my idea of idyllic bliss.   I guess I  just haven’t got the patience for fishing, and trying to ‘outsmart’ a fish does seem a bit dumb.

But then, neither am I completely cynical about the sport, job, or ‘past-time activity’, depending on which label you care to apply, for I do understand it to be one of the oldest, and hence longest-lasting occupations of humankind.  So there must be something in it.  Perhaps ‘a love of fishing’ is something you’re born with, or born into?  Perhaps, it’s in some people’s blood, or genes?  And perhaps these are people whose ancestral roots were close to water at a time when fishing was a survival strategy rather than simply a weekend affair.

That’s three ‘perhapses’ – I could give more.  Evidently, I’m no expert on this subject despite having previously lived close to the River Thames in Oxford (England), and now living close to the Caronte Canal in Martigues (France).  Shame on me – you might say.

I can appreciate fish, though- whether captured by poets or artists:

Pike, three inches long, perfect Pike in all parts, green tigering the gold.
Killers from the egg: the malevolent aged grin. They dance on the surface among the flies.  (Ted Hughes. Pike)

But spending hours beside an expanse of water, staring at the rod and float waiting interminably for a fish to bite and then to pounce and jerk it out of the water – is, to re-iterate, really not my thing.

However, to get to the point, it obviously is the thing for a large percentage of my recently adopted Martigues’ population.  In fact, I actually wonder whether more Martigues people go fishing than go to watch Martigues FC (possibly), go to church (surely?), or go to the saturday night disco (definitely, no disco in Martigues).  So, why the great fascination for fishing in Martigues? I’ve seen the 8 kms length of the Caronte Canal in Martigues crammed with hundreds of fishermen from dawn to dusk (yes, literally!)  – especially when the dorade season is at it’s height.

(Martigues is 30 kms west of Marseille at a juncture of the Caronte canal, which leads to the Mediterranean, and the Etang-de-Berre; a large sea-water lake).

Well, firstly, after 15 months of living in Martigues I now appreciate the many different forms that fishing takes.  There are the shell-fishers, ankle-deep in surf whilst balancing on coastal rocks to gather mussels; the canal-side fishermen with fishing toolkit boxes discussing baits and currents with fishing neighbours; the waist-deep fishermen standing firm against the flow casting into deeper mid-channel waters; the ‘bourdigues’ fishermen, stretching nets across the Caronte canal from side-to-side;

– the small-boat fishermen gliding out upon the Etang-du-Berre with the sunrise and using rods and/or nets; the professional mussel  collector on his open-top barge , dredging the Etang-du-Berre to return with loaded crates; the serious sea-fishermen heading out into the Mediterranean for the tuna weighing up to 600 kilos and worth a tidy fortune, and the professional deep sea fishermen on larger boats in search of the tuna shoals with the aid (so I’m told) of helicopters.

Such are the modern day fishermen.  Previously other local techniques were engaged in.  The most interesting of these is the ‘Seinche’, the last of which occured in the 1960s.  The ‘Seinch’ (watch report here – in French) was a technique whereby a local would stand on a clifftop at ‘Le Carro’, observing the sea and waiting for a sign of an approaching tuna shoal.  The sign was a milky-white colouration of the water.  On viewing this, the watch-out would then blow a conch-shell and the local village men would run for their boats and head out for the shoal.  They would then encircle and trap the tuna in nets, catching them in their thousands!  The practice came to a halt as the shipping industry along this stretch of coast grew and forced the tuna shoals further out to sea.  Hence the use of helicopters today. 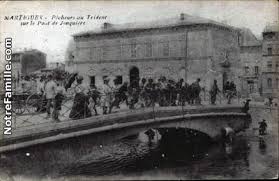 Another central Martigues technique from the past involved using tridents from bridges.  At certain times of the year shoals of fish would swim up canal from the Mediterranane to the Etang-du-Berre.  Locals would then simply lean over the bridges and spear the fish as they passed beneath.

So, fishing in Martigues, and along the coast, is an intrinsic part of Martigues culture. Collecting shell-fish and learning how to fish goes back to the origins of our homo sapiens species.  Perhaps it was one reason for human migrations out of Africa 100,000 (give-or-take) years ago.  Meat, and the cooking of meat, led to cerebral growth, which aided further technological advances, and with environmental/population pressures global exploration began. One route taken followed the coast into Central Asia and then cut back into Europe.  With the ice-age making the north of Europe inhabitable, communities spread throughout the Mediterranan zone.  Initially these were hunter-gatherer communities following animal herds on annual migrations whilst exploiting food resources found along coasts and inland rivers.  Then sedentarism kicked-in, to be followed by the neolithic’s introduction of farming,  which became integrated into Western Mediterranean and Atlantic coast cultures around 5500 B.C.

Fishing and shell-fish gathering, thus, goes back a long way.  Millenia ago it was discovered that mussels thrown upon a fire would open up their shells to deliver the edible flesh within and then provide useful tools themselves, such as for scraping hides and collecting fat.  Sheep domestication too began early on as a sedentary mesolithic practice, and sheep were grazed throughout the French Mediterranean littoral during winter before being led up into the Provencal hills in summer: A practice known as ‘transhumance’ which continues today.  Communities existed between the hills and the coast, benefitting from both.

Mesolithic evidence of human occupation in the region of Martigues begins around 7,500 B.C at a site known as ‘l’abri-de-Font-aux-Pigeons’.  It’s an overhanging cliff shelter over-looking the town of ‘Chateauneuf-les-Martigues’.   The site was first excavated in the 1950s by  M.Escalon de Fonton who termed the fine stone artifacts and shell-impressed pottery finds he discovered as being ‘Castelnovian’ in culture.  The site was continuously occupied into and during the neolithic period during which time several other local sites came into existance e.g. Collet-Redon and Ponteau-Gare.

In Martigues a settlement known as Maritima Avaticorum (a Roman naming), set up on the banks of the Etang-de-Berre around the 2nd Century B.C.   This was an overflow site from a larger site 10 kms west which is known today as St.Blaise built by the Greeks circa 6th century B.C.  Another site of similar antiquity and Greek provenance is at St. Pierre-les-Martigues, 10 kms south.  By this time, of course, subsistence strategies had become multiplex – farming, animal husbandry, fishing, hunting-and-gathering, with vinyards and olive groves dotting the landscape.  Pottery too had substantially developed, in addition to metallurgy with bronze and ironware products commonplace.

Nevertheless, and specific to Martigues, fishing was central to everyday life.  A swampy (‘marecage‘) connection between the Mediterrannean and the Etang-de-Berre had existed since the rising of sea levels at the end of the last ice age.  But once the Romans made it navigable for their ships between 104-102 B.C.  (by creating the ‘Caronte canal’), fishing really took off as a food resource.  And so has it remained.  In the 16th century, for example, thousands of ‘Martigaux’ (Martigues people) lived by and on the fruits of the sea.   There were 1,300 fishing boat captains plus boat builders and net-makers plus schools to teach the young the art and secrets of landing a good catch.

A fishing speciality of Martigues has long been the ‘bourdigues‘.  For centuries these were particularly efficient due to the numerous islets at the mouth of the canal/Etang-de-Berre juncture.  Systems of nets could be strung out on wooden frames across them to trap migrating fish.  This caused some conflict between bourdigues owners (for centuries the archbishops of Arles) and boat fishermen, for it restricted navigation.  But the issue was resolved through the establishment of a Martigues fishing union (‘prud’homie pecheurs’) which signalled the demise of the bourdigues.  Today, only one bourdigue exists.  It provides the town with a particular culinary speciality:  ‘Poutagne’.  A caviar prepared from mullet fish eggs.

Local fishing knowledge, however, is not like knowing the location of truffles and cêpes.  Fishing knowledge is an open secret.  It is not selfishly guarded.  In fact, local fishermen want to tell you which is the best bait, rod, reel, hook and line; the best time of day as well as the best place, (for which type of fish), and how to predict the currents and the tides which constantly change throughout the course of the year.  And yes, opinions differ.  That is part of the attraction.   Showing superior know-how that has often been passed on from father-to-son and gained through a life-time’s experience is a game of fishing one-upmanship.  Fishing savoir-faire  is then proved through this amicable and competitive spirit in catching the most, the biggest, and the best fish.  In Martigues this is the Dorade Royale.  And yes, they’ll even proudly tell you the best way to cook it.

Perhaps I should put down my books and take up a fishing rod?   That seems the way to become a true Martigeaux! 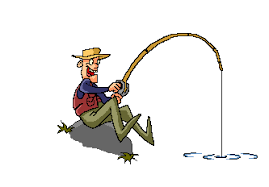 4 comments on “Gone fishing – in Martigues.”